Release the tension in your muscles to help realign and provide lasting stability to a body.

alleviates pain and stress by aligning the body’s structure

works with the body, not against it

In short, Rolfing is a hands-on healing modality which corrects posture and offers pain relief by releasing the tension in the connective tissues that surround the muscles to align and provide lasting stability to the body.

How does Rolfing Work?

Rolfing uses physical pressure (with hands and fingers) to lengthen and return the entire body’s connective tissue to its original symmetry and balance. This whole-body treatment is necessary in order to enable the changes to be integrated throughout.

The aim is to achieve the optimal alignment for that person that gives a lasting stability, with no need for constant return visits.

What clients have to say

"I have recently finished the 10 session Rolfing treatment with Dick Larson. I am very pleased with what resulted. Instead of my legs toeing out when I walk or stand, I now can walk naturally straight ahead. My balance is much improved. My shoulders now are lower and set further back rather than being rounded and right. My whole system is less tense and much looser."

"Rolfing with the ten session series proved to be a most remarkable transforming bodywork for myself, especially being a massage therapist. I highly recommend the Rolfing treatment. Chronic pain patterns I had for years disappeared. Rolfing with Dick Larson is a foundation for life. It changed my life."

"In our work together, I have experienced Dick as a sensitive and intuitive practitioner. He remains present (in his attention) and holds a safe space for his clients throughout each session, based on my own and others individual experience. He has a peaceful presence that enables me to feel comfortable and safe, and helps me come to a better understanding of myself through our work. In all, it has been a powerful, life-transforming journey for me "

"I must extend my sincere gratitude for your talent and skills. Your insights and helpful hints on sitting, standing, body awareness, etc. were as helpful as the actual Rolfing, or maybe even more so. I also said I knew you were the person to trust! …. I was right."

A Brief History of Rolfing

Rolfing is a whole-body system of health care originated by and named for Dr. Ida P. Rolf, Ph.D. Dr. Rolf called her work "Structural Integration", because it focuses on the structure of the body, releasing the body from lifelong patterns of tension, to change posture and alignment.

Rolfing became more widely known after Dr. Rolf helped a young boy, named Tim Law, in 1959. Tim was diagnosed by doctors as suffering from Legg-Perthes disease: doctors were certain that by the time he was 20, he would be confined to life in a wheelchair.

The doctors only recommendation was to put Tim into a cast - for 5 years - to help rectify his condition. After much consideration, Tim's mother made a difficult, yet courageous, decision to have Dr. Rolf work with her son.

The last 46 years have borne out the correctness of her decision: Tim went on to be a champion surfer in high school and college, father two children, and live a happy and fulfilling life until his passing in 2017. 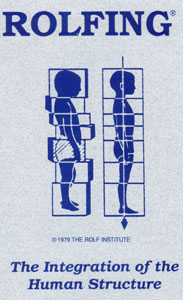 The Dr. Ida Rolf Institute’s “little-boy” logo is based on the actual before and after of a four-year old boy named Tim Law.

Dr. Rolf's discovery was that if specific kinds of pressure were applied to fascia, the body shape will change in a lasting way. The body is changeable, a plastic medium.

To illustrate the possible consequences of the body’s changeability, consider a twisted ankle. The connective tissue in the affected ankle area will shorten and thicken (for support) causing a temporary limp. This shifting of weight to the other leg restructures the muscles in the legs, pelvis, spine, and eventually throughout the body.

Although the limp disappears after a few weeks, the overall pattern in the muscles and tissues continues. As time goes by, the pelvis continues to tilt, the lower back becomes painful, and tensions and pains appear in the body without any obvious reason. The person is left with an ever-increasing distortion.

How Gravity Affects Your Body and its Relation to Rolfing

Rolfing Endorsements from the Medical Field

Rolfing Gave Me My Life Back (a personal testimonial)

The Role of Connective Tissue

Read about the History Behind Rolfing

What to Expect during your Rolfing Sessions

Rolfing is performed in a series of ten distinct sessions, each an hour to an hour and a quarter long. Dr. Larson uses physical pressure (with hands and fingers) to lengthen and return the body’s connective tissue to its original symmetry and balance.

It shouldn't. Much of the reputation for pain came from the early days when Rolfing was first gaining public recognition. Practitioners were a bit “over-zealous”, and techniques were crude (heavy-handed) by today’s standards. Since that time, the process has evolved significantly. More refined methods have been found, allowing the same or often better results to be achieved without the intense discomfort.

Frequently tissue does not really need much pressure to change; rather it is the practitioner’s sensitivity to what is going on in the tissue and the ability to respond appropriately that is necessary.

What should I wear to a Rolfing session?

Please come for your session in appropriate attire: for men, boxer shorts or briefs. For women: a sports bra and full coverage underwear.

Please wear what you feel is appropriate; my years of experience permit me to adjust to whatever allows you to feel at ease.

You're body may be out of balance

Individuals may perceive this gradual misalignment of structure as a sharp pain in the back, another as the unflattering contour of the belly. For someone it may show up as constant fatigue, and yet another as permanent anxiety or depression. All these symptoms point to a single problem: the body is out of balance.

YES! Photographs taken of clients years after the Basic Ten Series show that changes are still present and structure is enhanced. The basic series addresses patterns of tension and restriction accumulated in your body since childhood, including past injuries and their many compensations. Fortunately, you won’t recreate that history again.

Why is Rolfing sometimes specially used to treat the effects of psychological shock and trauma? Expand

While Rolfing is primarily involved with physical changes in the body, it affects the whole person. The effects of shock and trauma are extensive, affecting the nervous system and many other components of the body. By very slowly and carefully working with their physical manifestations, underlying neural and psychosomatic injuries are given a chance to heal. It is important to mention that the body is always striving to restore itself to balance after an injury and will do so if provided with a safe and secure opportunity. Clients often report positive changes, stating less stress, greater self-confidence and improved ability to handle life’s changes.

Can Rolfing be focused to one part of the body? Like the back? Expand

Of course I can do work just on your back. Unfortunately, it’s not so simple; the changes won’t necessarily address the underlying problem, and thus won’t last. Due to the amazing complexity of the human body, everything is connected. Therefore, the locality of where you experience pain may not be the source of the pain.

For example, what is happening in your back may be related to what is happening on the front of your body. So by improving your ability to breathe by working on the front of your body, your back is ultimately affected for the better. Or, the problem may be below the back. The body, like any building or structure, needs the foundation underneath to be strong and stable for the top to be healthy and right. Amazing as it may seem, the source of back pain can often be relieved by working on your feet and legs.

One of Dr. Rolf’s famous quotes to her students was “Where you think it is, it ain’t”. This means we have to look beyond the obvious. We aren’t just trying to relieve symptoms, but change your entire structure so that it moves freely and effortlessly, and functions at a much higher level of ease and efficiency.

Why is Fascia so important in Rolfing? Expand

Most bodies are in a state of imbalance. Consequently, as we grow older, we often “shrink” in height, and slowly lose flexibility. Our bones stay the same length and our muscles can still function, but the connective tissue (fascia) is what changes the most.

Fascia spreads throughout the body in a three dimensional web from head to toe without interruption. Trauma, inflammation, and poor posture over time can create a binding down of fascia, resulting in excessive pressure on nerves, muscles, blood vessels, bones, and organs. Unfortunately, all of the standard tests such as X rays, myelograms, CAT scans, and EMG’s do not show fascial restrictions. It is recognized that a very high percentage of people suffering with diverse pains, headaches, and various limitations in their movement may be having fascial restriction problems; regrettably, they are simply mis-diagnosed.

Is there anything beyond the basic series of Rolfing? Expand

The basic series makes significant changes in the form, balance and alignment of the body, but realistically it is not a one-time cure-all for body dysfunction. After a period of adjustment and integration (three months to one year or longer) it is possible to continue the process.

Is there scientific proof about Rolfing?

YES! Rolfing has been studied scientifically several times, with very positive results (more studies are currently ongoing). One example is a five year study conducted by Dr. Valerie Hunt and Dr. Wayne Massey at the UCLA Department of Kinesiology, called “A Study of Structural Integration from Neuromuscular, Energy Field and Emotional Approaches”. There were measurements before and after Rolfing of anxiety states, brain hemisphere activity, energy field photography, DC recordings of energy flow in electrical voltage readings, EMG recordings from sixteen separate muscles, electromyograms of neuromuscular patterning of energy, and electronic auric field study.
This study produced many results, difficult to briefly summarize. These are a few of the outstanding results:

Have more questions? Please feel free to get in touch so we can answer any specific questions you have about Rolfing.